On June 16, 1897, with Grover Cleveland now out of office, a second effort to annex the Hawaiian Islands to the United States was attempted. A treaty was signed in Washington, D.C. between representatives of the self-proclaimed Republic of Hawai‘i and the newly elected president of the United States, William McKinley.

The following day in Washington, her Majesty Queen Lili‘uokalani submitted a formal letter of protest to President McKinley, asserting that this proposed treaty of annexation violated the existing Treaty of 1850 between the Hawaiian Kingdom and the United States.

Word of what had transpired in Washington soon reached the islands. Anticipating that the US Senate would reconvene in December to consider this second attempt at annexation, an aggressive campaign was initiated, intending to fortify the queen's second letter of protest.

On September 6, 1897, James Kaulia, President of the Hui Aloha ‘Aina (the Hawaiian Patriotic League), gave a stirring speech before thousands at Palace Square in Honolulu. He said agreeing to annexation was like agreeing to being buried alive. He asserted that a mass refusal by the people could prevent annexation.

Let us take up the honorable struggle. Do not be afraid. Be steadfast in aloha for your land and be united in thought. Protest forever the annexation of Hawai‘i until the very last patriot lives.

A petition to the President, Congress and People of the United States, was read and approved at this rally, asking that no further steps be taken toward the ratification of the treaty.

The men and women of the Hui Aloha ‘Aina, through the efforts of many loyal and dedicated Hawaiian subjects, launched a full scale petition drive that lasted approximately two months. They went from island to island, from shore to shore, leaving no stone unturned in their efforts to document opposition to the proposed treaty. The petition was printed in both Hawaiian and English. 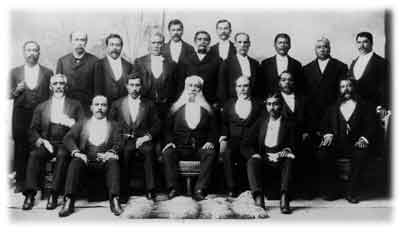 NOENOE SILVA: The Hui Aloha ‘Aina was founded specifically to support the Queen and to protest annexation. They described the men's branch as 7500 men from the different islands and the women's branch as 11,000 women at this time.

The women did a lot of the work.

Mrs. Laura Mahelona went to Kona and Ka‘u, and she went – in those days, of course, there was no airplane, so there were these steamer mail boats, you know, that would go to every village once a week or so and deliver the mail.

NOENOE SILVA: So her method was she went from North Kona down to Ka‘u, stopped in every village along the way and left the blank petitions with the chapter presidents of the village chapters of the hui, and gave them the instructions and said "Call a meeting and have all of your people sign this. And I'll come back in a week and I'll pick up the signed petitions." All the way, North Kona to Ka‘u.

So the following week she came back, and, at every little village, it wasn't just the chapter president coming out to meet her, but people came out to give her leis and to express their mahalo. Because she had brought to them this instrument by which they could make their will be known.

And so the story in the Ke Aloha Aina newspaper is that, every time she went, you know, got off the boat and received the petitions, she was covered in leis so that you couldn't even see her dress. And she'd have to go on the boat, take them all off, and then at the next stop the exact same thing would happen. And she gathered 4,216 signatures in Kona and Ka‘u.

JON OSORIO: When the members of Hui Kalai‘aina and Hui Aloha ‘Aina went out to collect signatures, it wasn't like today where you have to stand around and beg people to sign a petition. People were looking for them. They were seeking them out. And everybody, I mean it was men, women and children signed these petitions.

Hawaiians really didn't have either power or money or government to preserve their nationhood. What they had was their will.

By November of 1897 they had successfully gathered the signatures and support of over 21,000 patriots. In a joint effort, the Hui Kalai‘aina also gathered through their petition drive nearly 17,000 signatures.

Together there were over 38,000 signatures, representing ninety-five percent of the Native Hawaiian population.

KEKUNI BLAISDELL: The estimated population at that time of Kanaka Maoli was 40,000. So virtually every Kanaka Maoli signed.

No laila, therefore, every Kanaka Maoli today can find at least one ancestor on those petitions.

And in Honolulu, where the original petitions were brought from the National Archives in Wakinekona, Washington, crowds of people have gathered, to seek, to ‘imi, the names of their ancestors there. And we see them weep, lament, discover these names. And all the mana, special spiritual energy and power in that experience that they feel transmitted to them.

And the message is clear. It calls upon us today, i keia wa, to be like our ancestors who took a stand.

We Kanaka Maoli people, must resist, must oppose this annexation of our homeland to the United States forever.

JIM BARTELS: I really want you to realize how important this document is. To my mind, I think this is the greatest find in Hawaiian history in the 20th century.

Noenoe has found something that makes us different people than we thought we were. This document reveals our ancestors to be heroes. To be people of great ability, wisdom and strength. And I didn't know this when Noenoe made this discovery. I thought, as many people did, that our kupuna simply went home and wept after the monarchy. That isn't true, as we see. This document changes everything. We are a different people because of it. We can't go back to that old image.

James Kaulia, David Kalauokalani, John Richardson and William Auld traveled to Washington to deliver the petitions to the U.S. Senate. In December, while they watched from the gallery, the text of the monster petition was read on the floor of the Senate and the signature petitions were formally accepted.

As a result of these protests from the Queen and her people, the United States Senate failed to obtain the required two-thirds vote as mandated by the US constitution to ratify a treaty. By March of 1898, the treaty of annexation was dead.